We have met early in the morning at school where we have been received by the principal herself. We have been told some facts about Loviisa and then have gone on a tour in order to get to know it better and to film some scenes in some of its most well-known sites. We have visited the church, the Town Hall, the marketplace and the harbor. We have even walked on the Baltic Sea frozen waters.

After an early lunch (at 12) we have shot some more scenes for our film.

It’s still quite early here but the day comes to its end. The light is fading and so is the temperature. Time to rest before dinner.

Tomorrow trip to Helsinki, capital of Finland. See you tomorrow. 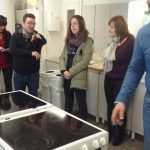 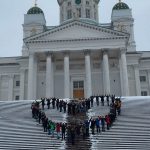