Long exhausting day today. In the morning we have gone to Belfast and visited the Titanic Museum. It is a very modern interactive museum located in the dry dock where the Titanic was built between 1909 and 1912. The museum recreates the shipyard and the inside of the ship among other things. It’s an emblematic site for the city. At the entrance we have recorded another scene and some more useful images for the short.

We have been to the Northern Irish Assembly, the Parliament , in the afternoon, a historical building where we have visited both the Chambers of Lords and Commons. We have learnt a bit about political and administrative organisation in here.

After lunch we have visited Belfast city centre and done some shopping. Some have gone back to Carrickfergus while others have stayed for dinner in the city and have had the chance to see a friendly football match at Windsor Stadium: Northern Ireland vs Croatia. A very nice and fun experience, the result was not that good though. Tomorrow we’re staying in Carrickfergus and doing some more filming. We’ll tell you all about it. 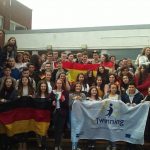 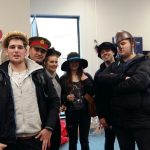